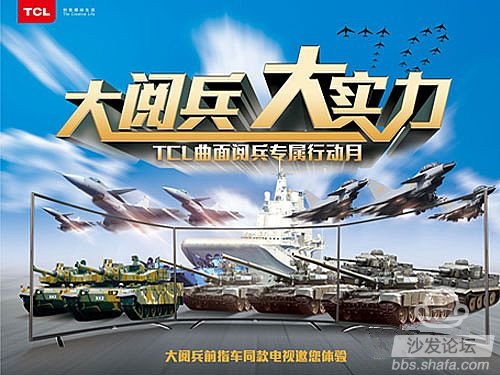 On the 23rd, the much-anticipated 9.3 military parade preview was held in Beijing. Many people's circle of friends were swiped by various wonderful photos from Beijing. While they were envious, they were also in a hurry: There were only a few days away from the parade. How to pick a better TV to watch this? The most shocking live parade?
Recently, the reporter visited a number of home appliance stores in Guangzhou and found that consumers who came to buy new TVs specifically for watching the 9.3 parade were in an endless stream. In order to attract consumers, the merchants also played a lot of tempting preferential policies. However, in the face of a dazzling array of television products, how do consumers think? Mr. Wong, who had just purchased a TCL curved TV H8800, said: â€œThis yearâ€™s parade is the first of its kind in 70 years and itâ€™s very commemorative. Although the scene cannot go, but you can buy a curved surface television with the most powerful presence, and itâ€™s still The front line of the military parade commands the same TV. The army has chosen, but what can be wrong!"

The reporter learned that with the approaching of the parade, the attention of curved television has soared. Recently, after being evaluated and assessed by the military, the TCL curved TV H8800 formally entered the command vehicle for the military parade front and the National Security Guard honor room, providing professional technical support and guarantees for the successful military parade, which further strengthened the consumer. Confidence. TCL stores sales representatives reflect that many consumers have come forward to the parade, indicating that it will have to review the same paragraph before the car curved surface TV, powerful drive surface TV H8800 in the country's crazy hot.

Observers pointed out that the parade will be expected to help the parade of the same paragraph before the curved surface TV H8800 industry leader, but also to help TCL as the representative of the curved TV camp, with a large surface strength to win gold nine silver ten. 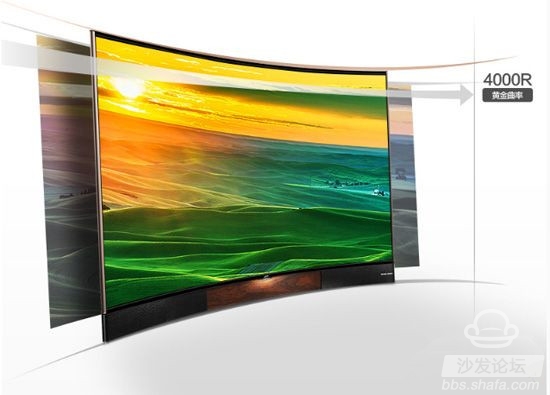 Every major event, such as the Olympic Games, the World Cup and even major events at home and abroad, will become a feast for all people to watch live, and it is always a sales event for the color TV industry. This year's military parade is no exception and is expected to trigger a new wave of color TV buying boom. Industry observers pointed out that the parade was extraordinary. It was the first time in 70 years that a military commemoration ceremony was held to commemorate the victory of the Anti-Japanese War. In addition to various elements such as veteran phalances, generals, foreign troops, and men's and women's ceremonial guard flags, etc. In addition, there will be a large number of new weapons and equipment debut, highlights enough, enough enough, enough explosive.

"With the improvement of live broadcasting technology, this year's parade will be the clearest and most shocking once in history. But if there isn't a good TV, the viewing effect will be greatly reduced." Observers believe that if you look at the parade, you need to It is an immersive pleasure that maximizes the grace of the top parade and the shock of new weapons. â€œIn the large field of view and large-scale scenes for the restoration of military parade, curved TV is definitely the first choice.â€ In the curved market, TCL surface H8800 has acquired its army with its unique surface, color, clarity and sound. The recognition, officially boarded the command line at the front of the military parade, is also the preferred TV for consumers to watch live parade.

With over 10,000 troops, 11 trekking teams, 27 equipment teams, and 10 air echelons, such a huge military parade has put forward strict requirements on the TV's depth of field, visual angle and other display effects. The H8800 has a 4000R golden curvature and achieves curvature characteristics that match the curvature of the human eye. It not only dramatically improves the image quality, but also enhances the image quality, visual field, and color contrast. Unprecedented comfort perception. With the super-immediate sense and large vision, H8800 can protect users from leaving their homes, and they can come to the parade scene as if they were in person. They can feel the shock of tens of thousands of people, steel torrents and fighter jets. 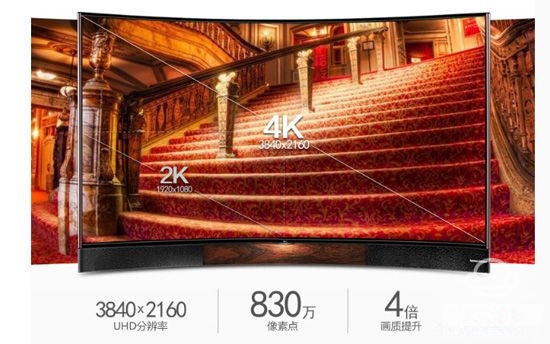 TV+ curved surface H8800
At the same time, the curved TV also excels in both picture quality and sound quality. With curved screens, the stereoscopic viewing system is perfectly constructed. It is not just a military parade. After watching any picture, it can bring you far beyond ordinary flat-screen TVs. Experience.

The parade of the 9.3 parade is full. Not only were the crosswalks, vertical lines, and slashes required by the squadron to be seen on the â€œthree linesâ€, but each of the officers and men also had a beautiful and unique anti-war medal and a rich pattern of armbands. In addition, the air echelon will also adopt the â€œ70â€ commemorative squadron. Flying, and using air helicopters to fly the national flag, flag. If the television at home can not clearly capture these wonderful moments, blurred, that military viewing experience will be greatly discounted. The curved H8800 uses a true 4K screen with 8.3 million pixels, which can clearly show every detail in the military parade to the user, and fully utilize the beauty of the 38402160 resolution.

Thanks to the true color display technology developed exclusively by TCL, the H8800 also achieved 96% NTSC color gamut coverage, and ordinary flat-screen TVs have only 70% to 80%. Such a high color gamut can perfectly restore true colors and guarantee the use of the H8800 to watch the parade. It can clearly restore the beautiful colored ribbons of the Air Force fighter formation pulled over the Tiananmen Square, the soldiersâ€™ bronze skin, and the steel texture of various weapons and equipment. Make every scene picturesque. 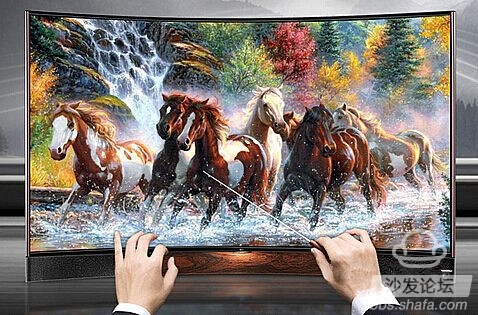 TV+ curved surface H8800
In addition, H8800 introduced the world's top audio Harman Kardon S-class surface acoustics, up to 5.5L large volume, up to 50W audio power, enough to meet the higher requirements of users, sitting in front of the TV will be "early" Hear from Beijing's Tiananmen Square, he was calm and powerful, full of rhythmical stepping sounds, and neat and clear, imposing slogans.

â€œThe curved TV H8800 is definitely the best choice for watching parades and watching movies at home.â€ Observers believe that there are only one parade in several years, and many exciting details are not to be missed, but most consumers can only watch it on the TV at home. Therefore, it is necessary to restore the ultimate picture of the parade and become the highest standard for checking the viewing effect of the color TV. At present, only the curved TV H8800 with a superior telepresence and large field of vision can meet this standard to the maximum extent. It will enable ordinary users to enjoy the same viewing angle as the parade before the military parade, just like the general parade experience at the scene. It deserved to be the best artifact to watch the parade.

Do not hesitate to start, great strength to achieve the parade before the car with the TV 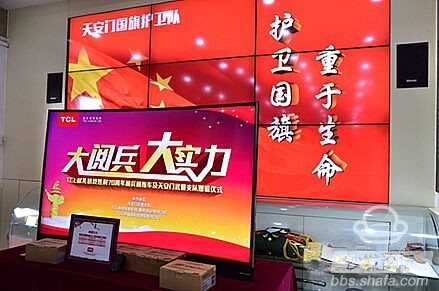 The TCL Surface TV H8800 series formally entered the Commanding Front of the Grand Military Parade and the National Security Guards Honorary Hall. It has become part of the display of China's industrial innovation and has been tested with the latest national defense equipment worldwide. This undoubtedly represents that the curved television as the best viewing equipment for the military parade has already received the actual approval of the military parade.

â€œThe TCL curved TV landed before the parade and pointed to the car. It was a powerful sign. Even the big parade chose curved surface television itself. What are the reasons why consumers are hesitant?â€ Observers highly affirmed that the curved television entered the parade before the parade. The impact on the color TV market. According to the introduction of the national flag guard team, the front-line command vehicle is mainly responsible for conducting full-course surveillance and command of the parade. It is the front-line command center for the parade, and it is necessary to accurately control the parade scene and can imagine the high requirements of the display screen. This time, the front-wheel-driver gave up flat-panel TVs for decades, and it was the telepresence and big field of vision that TCL H8800 displayed.

The information on the surface military television landing parade brought a wave of waves in the color TV industry, and the call for parades to buy curved surfaces kept rising. The authoritative media including the Oriental Morning Post and the Yangzi Evening News believed that the appearance of the TCL's curved TV debuting military parade fully demonstrated the excellent military quality of this product. The realization of the military parade with top-notch technical support from Chinese-made and Chinese companies was a testimony to the countryâ€™s soft power. It is the pride of Chinese national industry. In recent days, China National Grid and Consumer Electronics Laboratory successively held television tastings with the same models before the military parade. The elites from all walks of life came together to get in touch with the H8800. National Geographic Special Photographer Chen Haiyan said that through the demonstration of photography, we can see that the H8800 captures and reproduces large scenes in detail, especially its wide gamut space, which makes it possible to perform from green to red. . Li Yuanyi, editor of China's most authoritative army equipment magazine, Tanks and Armored Vehicles magazine, said that the parade was a national event and that it was able to break through heavy screenings and successfully landed in the parade. Only those most sophisticated equipment, TCL curved TVs, completed this feat. TCL's surface strength is extraordinary.

"With the surface television landing parade, will certainly ignite the consumer enthusiasm in the color TV market, who can control the curved surface television, who will win the gold nine silver ten." Industry observers pointed out that after the parade will open the TV market, the most important throughout the year The golden nine silver ten harvest season, for the successful landing of the parade, and to become the military before the parade of the TV with the same TV TCL curved TV camp, no doubt in one fell swoop stood in the commanding heights of the competition.

The parade on September 3 has entered a countdown. In order to allow more consumers to carry the parade to the front of the car with the same paragraph curved surface TV, TCL in August opened a national sales terminal military parade area, held "big parade large - - TCL surface parade exclusive action "large-scale theme promotional activities. Not only 55 inch 4K high color gamut surface H8800 only 7999 yuan, 65 inch 4K surface only 13999 yuan, but also into the national escort team of the same surface H8800S-CUD maximum discount of 3,000 yuan. Since the event was held, it took only less than half a month to successfully elicit the active participation of consumers from across the country. Many TCL terminals had difficulty in finding the same type of curved surface television with the previous models, and quickly won the reputation of both consumers and the market. .

In addition to the exclusive prices and exclusive honors, TCL has set up thousands of people in some stores to offer their signatures to the motherland. After the signatures of consumers, these signatures will be presented to the National Flag Escort Team after the victory of the military parade and become history. Honor witness. "Look at the parade, we must choose a large-strength curved surface television. Everyone is robbing the TCL parade before the car with the same paragraph TV, so choose TCL right." Observers suggest that the election surface to see the parade, is definitely the majority of consumption The most sensible choice for 2015.