"Pseudo-Returnees" also has a good performance - Aukey QC2.0 three-port USB charger out of the box

How to write a novel before every time you want to write a novel? In fact, this is a place written by hand. If you think that there is much crap, please do not hesitate to skip this paragraph. The landlord will not mind

Speaking of USB chargers, the landlord had long wanted to buy a multi-port USB charger to take over all devices that required 5V USB power. However, Taobao Tmall Jingdong and other places made a lap, not the total power is too small (especially REMAX , 5 output total current 2.4A, who is enough to use ah?), the price is more than expected, there is ugly ...

In the same period, the landlord used the Surface Pro 3 external monitor and powered speakers to use a three-pin jack and a two-pin jack that had been inserted into the combo wall. Although there was also a spare two-pin jack, the space was very small, even if it was The single-port USB charger also missed this area, so it was easy to purchase a Philips mouthpiece (the direction of the line is all toward the wall, suitable for desktop use). 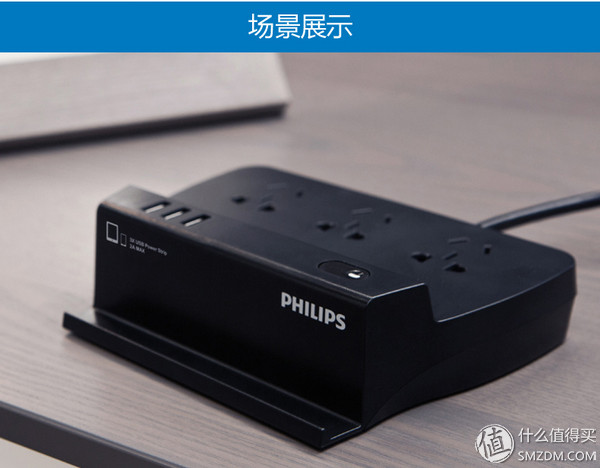 With 3 USB ports, maximum output 2.1A (actual measurement can reach 2.4A), with sufficient carrying capacity.

However, the charm blue E purchased by the landlord to use the second SIM card broke this quiet situation...

Intoxicated by the fast charge (mis) landlord purchased the LeTV QC3.0 (support MTKPE +) charger (just the main machine Xperia Z3 can also be used, thanks to the value of the following Friends of the evaluation)

So many chargers to charge the device at hand is already doing its job, prefer to die and see a Aukey three USB charger 59 yuan specials (special coupons), hand itch or under a single then the protagonist of this article will finally be on stage La.

Reference to the purchase link

About the Aukey brand

As early as when Taobao ran around looking for a charger, he saw the Aukey brand. At first glance, were you sent by Anker? The name is so hot, one is known as North American No. 1 and is known as the German brand. Anker seems to have made a name for himself in the old United States, but Aukey did not advertise his achievements in Europe (estimate is not), and even did not even have a Tmall shop ! In the sale of all Taobao personal and corporate stores, all look like an official store ... ... control him, there are discounts to buy again, it is the horse is immediately clear.

Before writing the article, it was found in Meiya, Asia, and Deya. It was actually sold, and the evaluation was good. 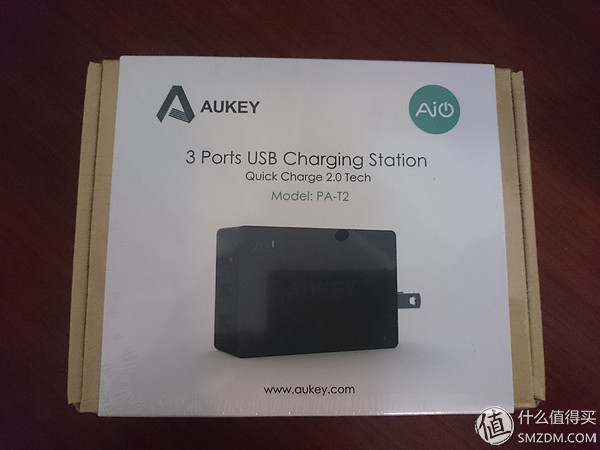 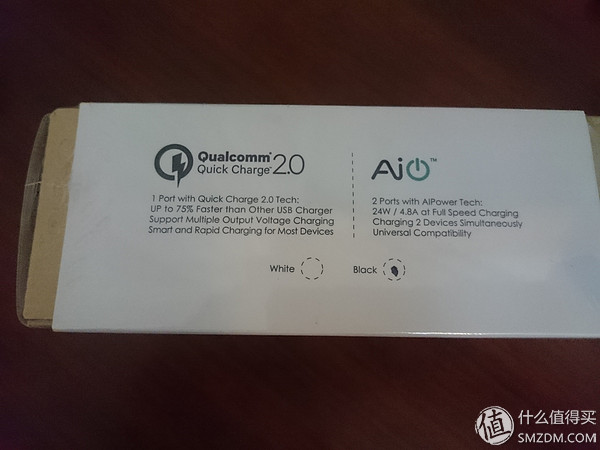 The side shows the QC2.0 and its own AiPower technology, it is estimated that no one will see, there are color identification (front with a product map, do not bother to give a white package again?) 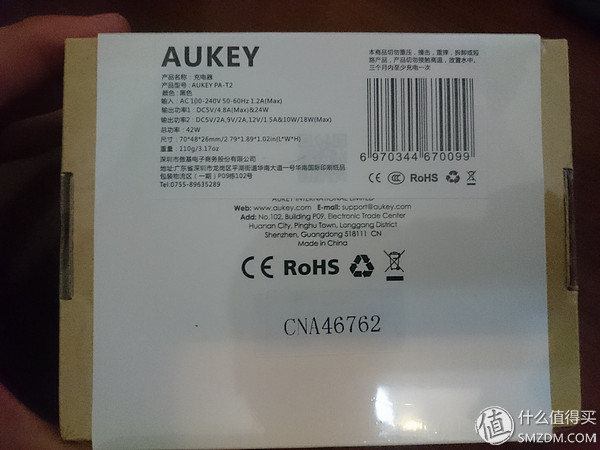 By the way, what is the ghost of "recharging at least once in three months..." 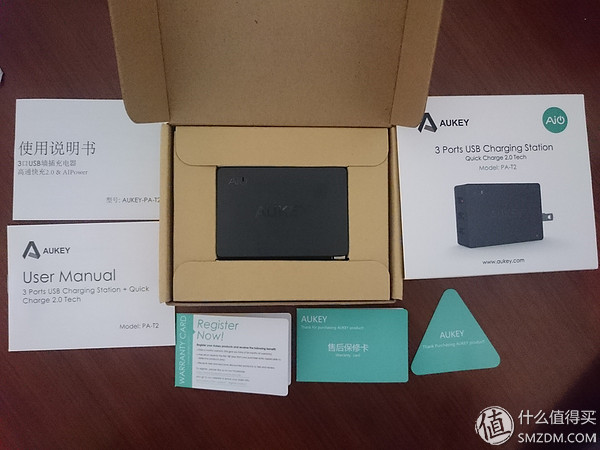 Open box! After removing the manual warranty card and certificate covered on the body, the compact size and heavy weight of the body make the owner feel that the money is not white.

The warranty card is also in two copies. The English version indicates that you can follow Aukey's account on Facebook to extend the warranty... The landlord believes this is not an egg. 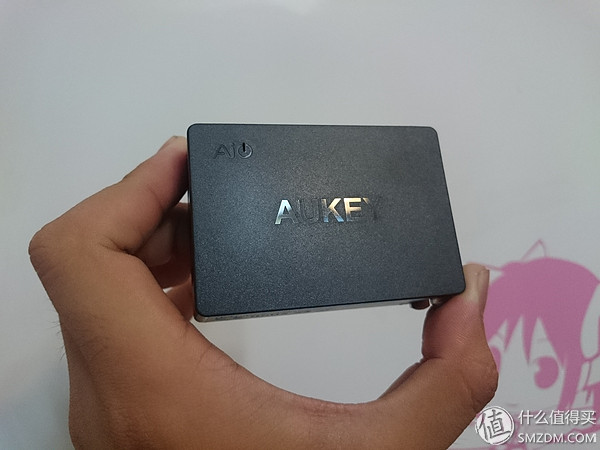 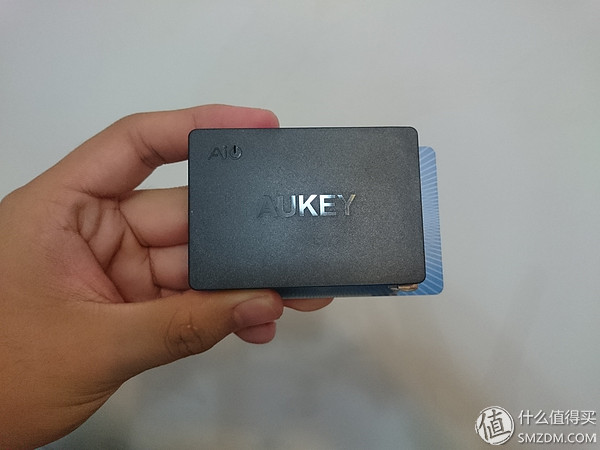 The three-dimensional model is 704826mm, which is smaller than the standard bank card size and is the result of folded pins. 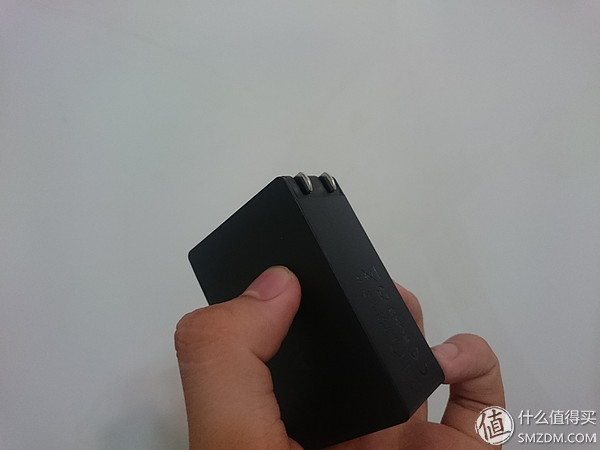 Pin protruding slightly for easy opening. If you use a thumb like a Zippo, you can feel a strong sense of damping, and there is a clear buzz when it is in place. This is definitely a good one. 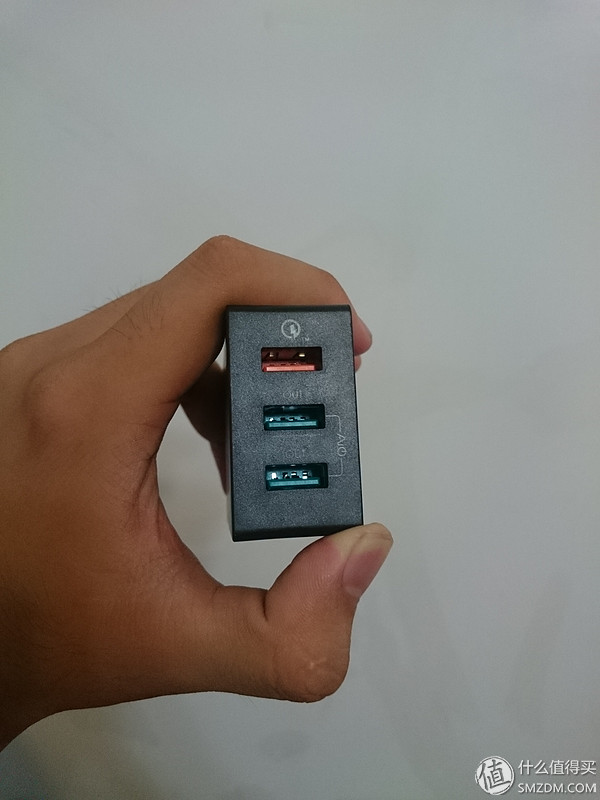 USB interface list, QC2.0 mouth is orange, AiPower mouth is green (inexplicable think of a VOOC). The deep slump of the three interfaces makes it easy to plug in, but there are doubts about whether the contact is good.

Simple test on the machine 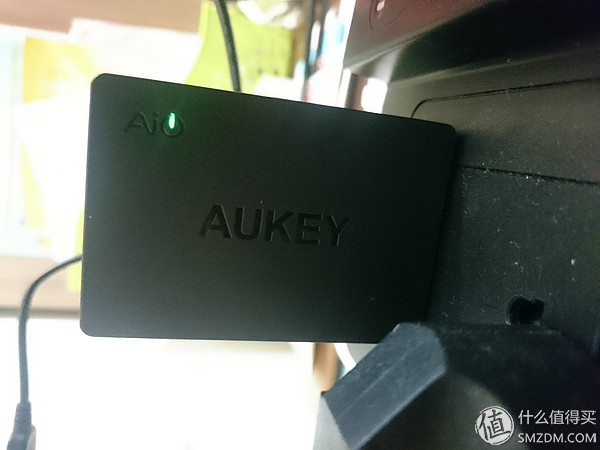 After plugging in the power supply, the I in the upper left corner of the I/O flag lights up in a faint green light, but due to the deep subsidence, the viewing angle is very small and there is almost no sense of presence. 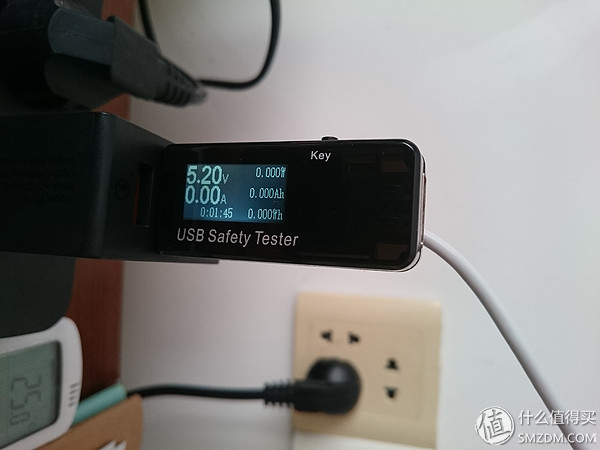 No-load 5.20V, high (photographs after the end of reshoot, and the following is not the same interface) 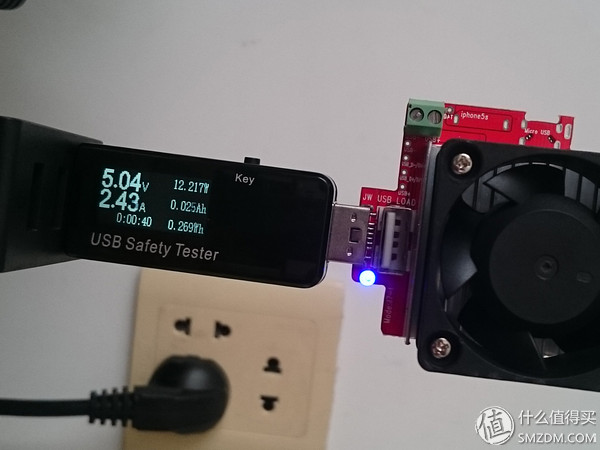 Using an electronic load, the current is increased step by step until the charger's rated upper limit, the voltage is maintained above 5V, but it is gradually reduced. It is clear that there is no line loss compensation, but the performance is sufficient. 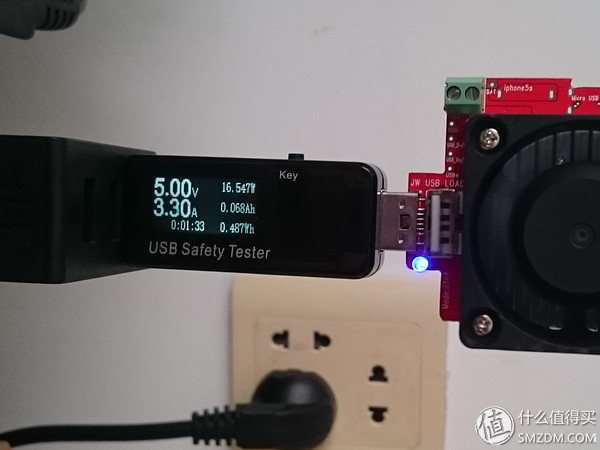 Violence testing, raising the current to the upper limit of the electronic load (fans frantic), still maintains a 5.00V voltage output without triggering the protection mechanism.

Running for 10 minutes continuously, the voltage and current are stable and there is heat (nonsense).

Only one ammeter and one electronic load have to be charged with Charm Blue E in another port (known current is about 1.43A) 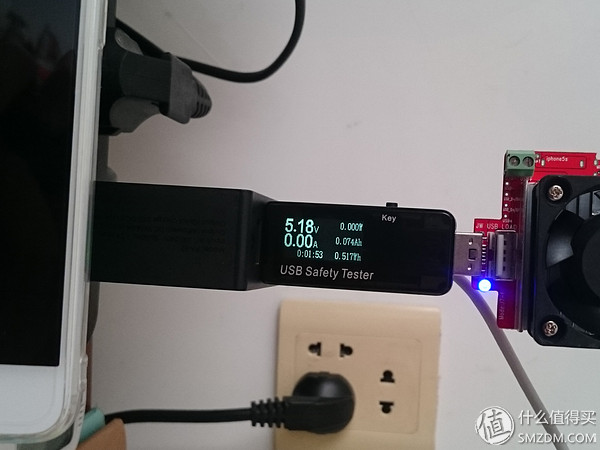 No-load, 5.18V, and almost the same data when only one device is connected, indicating that the two are working independently. 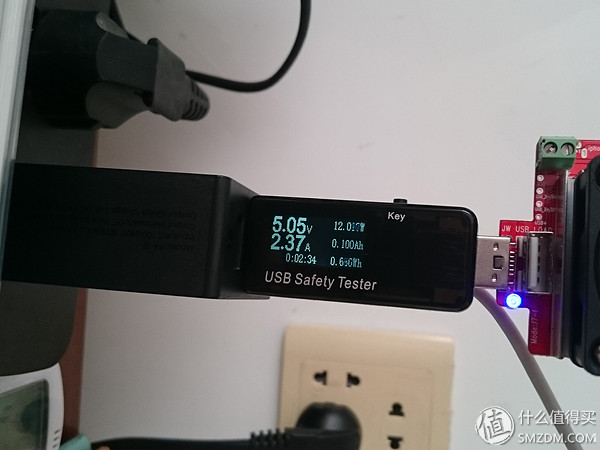 Adjust the current to about 2.4A, which is almost consistent with the above data, verify the conjecture of independent work. The violence test is slightly.

About 10 minutes of continuous operation, the charger is obviously hot.

The first is the no-load voltage of about 5.07V (forgot to take pictures) 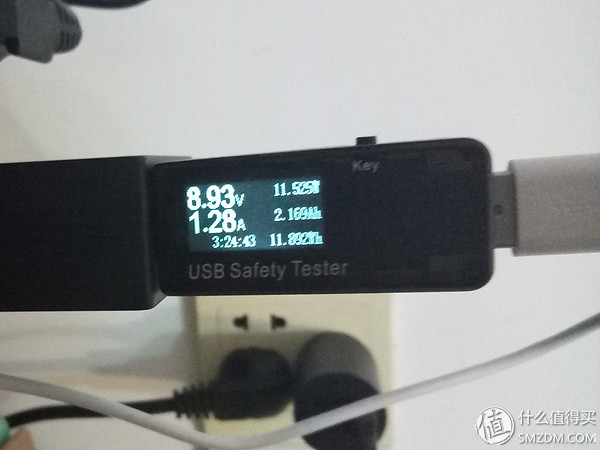 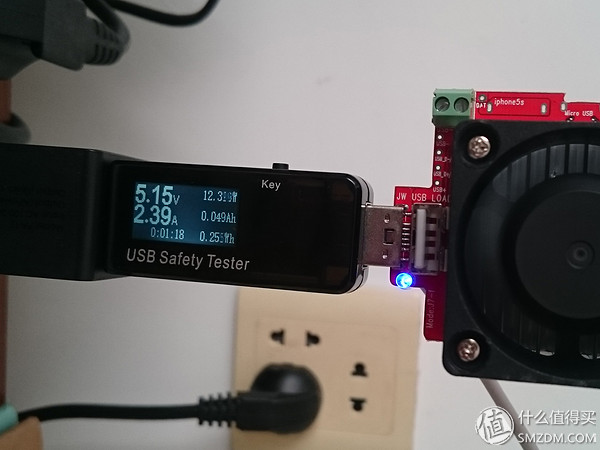 When preparing to pack things away, pick up the box and hear a sound, the original still hiding a microUSB cable. The line does not seem to have any bright spots, too lazy to put photos (Hey.

Overall, the appearance of this charger looks like it gives a lasting impression - when it was received at the party the next day, it was public. An iPhone user said: This is faster than my original charger. System identification), as well as a gray ground on the ground socket, pat clean as new. Material processing is much like a laptop more than a decade ago.

The output is also qualified - the actual green output of each 5.05V/2.40A and the line complement, support the QC2.0 orange output port to work independently without disturbing each other, improve efficiency, but for large amounts of heat at full load there are big doubts . The two colors of the tongue also add color to the appearance.

Folding pins save storage space, especially for travel use. The overall appearance is suitable for plugging in the socket board. If a five-hole wall is inserted, it will block the three-hole socket below.

Thank you for your reading. Finally, I will take the landlord's charger photo together as an ending. 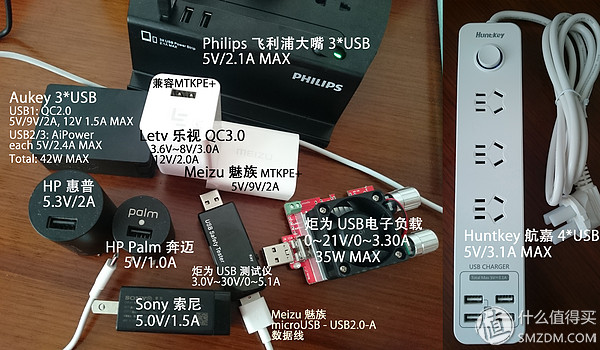 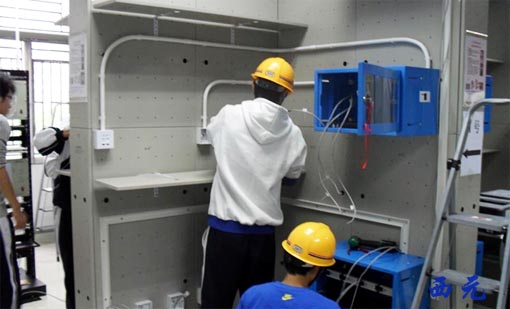 To offer a perfect product, we every worker pay attention to each detail of our network cabling products. With our company aim, first in our purchase department, our purchaser compares strictly in raw material suppliers to control cost but keep quality, our mold workshop makes inspection before plastic parts turned to production line .Before installation, our production line first will inspect on plastic parts and other components. During production procedure ,there is tester in steps according different products needs. After installation, the Quality Control members will make a full inspection on characters, appearance according our specification.