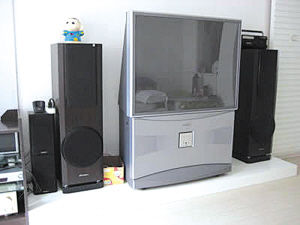 It is reported that China's color TV retail market sold a total of 43 million units in 2012, accounting for 20% of global TV sales. From the perspective of shipments, the top 6 Chinese color TV industry performed well, with annual shipments of about 57 million TVs. Taiwan, while the Japanese brand shipments were only 45 million units, domestic companies successfully shipped color TV over Japanese companies.

In 2012, the retail sales volume of domestic color TV reached 42.628 million units and vice president and secretary-general of the China Electronic Video Industry Association Bai Weimin pointed out that China's color TV brand has occupied 25% of global color TV shipments by the second quarter of 2012, and continues to be the most important in the world. One of the color TV markets.

According to Gao Sumei, deputy director of the Ministry of Industry and Information Technology's Operational Monitoring and Coordination Bureau, in the second half of the year, the home audiovisual industryâ€™s production growth has been warmer for six consecutive months. In November last year, the home audiovisual industry realized a 17.2% increase in sales value, which was higher than June. 12.6 percentage points. From January to November, the home audio-visual industry achieved a sales value of 482.7 billion yuan, a year-on-year increase of 9.0%, and the export delivery value was 232.6 billion yuan, a year-on-year increase of 0.8%, which is lower than the industry average of 9 percentage points. From January to November, it produced 125.153 million color TV sets, an increase of 9.1%, of which LCD TVs increased by 11.2%, accounting for 83.4%; CRT TVs decreased by 40.2%; PDP TVs decreased by 26.4%.

Ovid Consulting (AVC) analysis believes that the growth of color TV retail sales in 2012 was mainly due to the stabilization of the macro economy, the restoration of consumer confidence, and the timely implementation of energy-saving subsidies to drive the rapid growth of the overall scale. In the first half of 2012, affected by factors such as the trade-in policy overdraft, and experiencing problems in policies, combined with economic and willingness to consume, the overall scale has significantly decreased. With the introduction of subsidy policies, the price gap between energy-saving TV products and non-energy-saving TV products has significantly narrowed. Pulling power to consumers is significant. The proportion of subsidized products sold on the market has risen rapidly, which has led to a rebound in the overall scale.

In 2012, the most attention was given to the implementation of the energy-saving subsidies and benefits to the people. Since the implementation of the policy for half a year, its effectiveness has been significant. Related companies in the home appliance industry have actively adjusted their corporate strategy, production and sales, and actively cooperated with the implementation of the policy. Under the impetus of the New Energy Conservation Subsidy, all companies are increasing their investment in high-efficiency products, actively participating in the promotion of energy-saving products, and have achieved good results in the direction of China's macroeconomic development, industrial development, and the upgrading of energy-saving technologies of enterprises. Policy effect.

Chinese brands surpassed Japan in terms of the number of upstream panel production lines. With the mass production of China Star Optoelectronics 8.5 Generation Line and BOE 8.5 Generation Line, the domestic panel production line has risen, and the combination of domestic brands and domestic panel production lines has completely broken down. Overshadowed by the shortage of screens over the years in China's color TV industry, it has injected a booster for domestic brands. At present, the number of mass-produced TV panel lines for G6 and above has reached 7 in mainland China, which has surpassed Japan (4) and is ranked after China Taiwan (10) and South Korea (9). Judging from the sales share in China's domestic market, domestic brands have consistently occupied 80% of the market share. The domestic color TV industry has surpassed Japan in terms of market sales, shipments, and upstream panel resources.

Affected by many factors, in the domestic large-size LCD TV retail market, the domestic brands of LCD TVs are mainly concentrated in 50 to 60 inches, the size of the Chinese product brand share of up to 80%. In the 60-inch and above market segments, the share of domestic brands is low, and Japanese brands have a strong momentum.

Energy-saving subsidies promote industrial transformation and upgrading On May 25th, 2012, three ministries and commissions jointly issued the â€œImplementation Rules for Energy-Saving Products and Huimin Projects for the Promotion of High-efficiency and Energy-saving Flat-panel Televisionsâ€, and the flat-panel TV energy-saving subsidies policy was formally introduced. From June 1 to December 17, a total of three batches of short-listed subsidies were announced. There were 4629 LCD TVs and 98 plasma TVs, involving a total of 28 companies. According to AVC monthly monitoring data, in December 2012, sales of subsidized models already accounted for 92% of overall sales.

SAMSUNG Controller Board Card, in stock.